Photo of Strasbourg, Alsace regional capital, and capital of the European Union

Here is a bit of trivia for you.  Our April baking project was for an Alsatian Onion Pizza.  If you’re not familiar with this charming region in the North East corner of France, it sits near the intersection of France, Switzerland, and Germany.  The region is historic in that it is home to the greatest number of feudal castles in Europe — 400 of these castles in various states of ruin have been discovered.  The area also has a very rich wine heritage which includes Riesling, Pinot Gris, Pinot Blanc, Gewurztraminer, and Muscat.  The local wines are enchanting, and that view is supported by famed fashion designer Christian Dior.

“A small glass of Alsace wine is like a summer dress or a spring flower; it’s a ray of sunshine that makes life brighter.”

The area also has a rich gastronomic legacy which includes of all things Munster cheese. While I’ve not visited Alsace, I considered this recipe as a virtual afternoon trip to the region.  Note that as I searched a bit on the internet for similar recipes, most included bacon, which would honestly make a great addition.  Rose uses black olives instead in her recipe which you can find here along with her other variations.

The foundation of any pizza is, of course, the crust.  Rose offers up the recipe for her Perfect Pizza Dough along with an assortment of topping recipes and combinations.  While this one would not have likely been my first pick as I scanned through the choices, it was certainly enjoyable.  It also provided me with inspiration for a breakfast pizza.  I’ll be sure to update this post once I have the chance to test out that idea.

Rose recommends using King Arthur’s Italian Style flour which I just happened to have on hand.  I had not baked with this flour before, and don’t yet have an opinion on this one.  Here’s why.  The first recommendation that Rose makes is that you prepare the dough in advance and allow it to mature over a period of eight to 24-hours.  I had been busy with another loaf of my fave hearth bread and did not start the dough until just a few hours ahead of time.  In addition, I mixed the olive oil into the dough in error instead of just putting it inside the container with the dough while it was fermenting.  I’ll admit I was distracted by the loaf of bread that I had in process.

Another important timing note for this recipe is that the onions take a really long time to cook.  You start by smothering them over low heat for 45 minutes.  Then you crank up the heat to caramelize and dry them out.  I did not time this, but it took a little while.  I’d also note that to thinly slice three large onions, you really want to use a food processor  I started with my mandoline, but after slicing about 3/4 of an onion I moved on to the food processor. 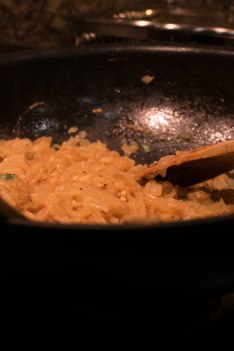 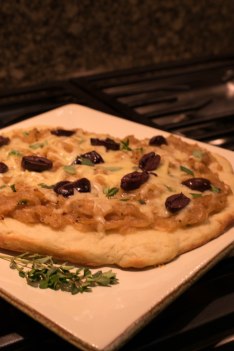 Bless her heart, Rose gives us permission to be experimental and somewhat liberal with the amounts of topping ingredients since everybody wants to maximize their favorite ingredients.  For me, this meant extra gruyére cheese and olives.

This recipe was a great opportunity to give my new baking stone a workout.  My old stone had cracked into three big pieces after many years of loyal service, so I ended up with this hot red number from Emile Henry.  I loved baking with this stone for a few reasons.  First, it has a glazed surface which is much easier to keep clean than the unglazed stone I had before.  Second, it is rectangular instead of square so it works better (at least I think it does) on a rectangular oven rack.  Third, and perhaps most important is safety.  This stone has handles built into the sides so I can move it safely, even while it’s hot.  I, unfortunately, have a tendency to  have the stone on the wrong rack and need to move it when the oven is already hot.

In terms of baking technique, you’re directed to pre-bake or blind bake the crust for 5 minutes.  The intent is to prevent the crust from becoming soggy, but honestly, that did not work so well.  I thought I had gotten all of the excess liquid out of the onion topping so when I make my breakfast pizza I will need to adjust the pre-bake and the topping to keep the crust crisp.

The Alsatian onion topping is delicious, however, I would suggest leaving out the added sugar.  I suspect it would be plenty sweet without it.  Despite the problems of my own making that I’ve noted, I will give this pizza dough another chance with extra care to follow the directions as written.  I have historically used a pizza dough recipe from Joanne Weir with good results, so I’m not sure that I would replace that with this one.  I’ve been craving a nice crispy, airy crust like the one I had here at Rays and Stark Bar here in LA.  I haven’t found a dupe for that one yet, but if you have any suggestions, I’m open to them.  I’m sure one change I will need to make is to bake directly on the stone.  I expect that to be much easier with my new stone.

Are you baking your own pizzas at home?  Of course I’d love to hear your favorites since I love pizza.  One of my favorites is a Turkish Lamb pizza from Joanne Weir that I learned in one of her classes.  I’ll link to it here.

This is a text widget. The Text Widget allows you to add text or HTML to your sidebar. You can use a text widget to display text, links, images, HTML, or a combination of these. Edit them in the Widget section of the Customizer.