After spending time this past Saturday at the Santa Monica Farmer’s Market, I was inspired to get back to making my own fresh juices at home.  My Omega juicer has been sitting in the cabinet collecting dust for a while despite my love of fresh juice.  At $8 to $9 for a 16-ounce bottle at one of the local juice shops here in L.A., making my own juice is a budget friendly option with added freshness and choice of ingredients as additional benefits.

My maternal grandmother was a woman way ahead of her time when it comes to the juicing craze.  The U.S. juice market today has been estimated to be $5B per year and growing.  If my Nana were still with us, she would be celebrating her 104th birthday next month.  Way back in the day, I think some family members thought she had lost her mind because she purchased a Jack LaLanne juicer.  I think this was back in the 70s, and while I don’t know what it cost back then, my understanding was that it was a relatively expensive item, the benefits of which hadn’t achieved mainstream acceptance yet.  The Jack LaLanne juicers are still available today (you can see them on Amazon) and look pretty much the same except the older models probably had more metal parts instead of plastic.

For those who aren’t familiar with LaLanne, he was a TV personality and fitness guru who was well known here in the U.S.  He remained incredibly fit throughout his life and passed away in 2011 at the ripe old age of 96.  My grandmother used that juicer primarily to make carrot juice, and when she passed away and I inherited that juicer the one juice in my repertoire was — you guessed it, carrot juice.

I used that old Jack LaLanne juicer until it gave out, and have bought two juicers since then.  My current juicer is the Omega VRT 350 which is categorized as a slow-masticating juicer.  Some of the advantages when compared with centrifugal machines like the Jack LaLanne model include:

The bullet points above are from a book titled The Juice Solution by Erin Quon and Briana Stockton.  When I bought juicer number two, I decided that I needed to expand my juicing horizons.  This is one of the books on juicing I’ve sought out for recipes and inspiration, but my first love and favorite go-to resource remains The Big Book of Juices: More Than 400 Natural Blends for Health and Vitality Every Day by Natalie Savona.  While the names of her juices are kinda goofy, she offers a broad range (405 to be exact) of fruit and vegetable juice recipes, as well as recipes for smoothies and quenchers.  I love this book so much I’ve also bought it as a gift for family members with an interest in juicing.

The juice featured in this post is Savona’s Gut Soother.  This juice features a blend of pears, carrots, pineapple and ginger root.  It is rich in beta-carotene, folic acid, and vitamin C to name a few of the key nutrients.

Once I washed and cut my produce, feeding it into the juicer was fairly quick and easy — the final results were delicious. 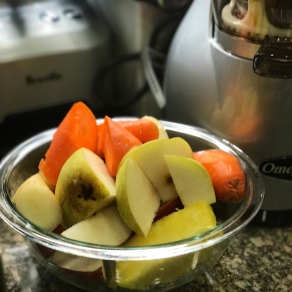 In addition to the Big Book of Juices and The Juice Solution, I would mention a beautiful juicing book by Julie Morris titled Superfood Juices.  The downside of this book is that the recipes often feature ingredients that are harder to come by.  My task is to pick a few recipes with more accessible ingredients and give them a whirl.

Where are you finding your juice-spiration, and what are your favorite combinations?

This is a text widget. The Text Widget allows you to add text or HTML to your sidebar. You can use a text widget to display text, links, images, HTML, or a combination of these. Edit them in the Widget section of the Customizer.